Float On! My First Time in a Sensory Deprivation Tank

I am afraid of the dark.

I’ve become less afraid over time, most notably after my first child was born during a rather cold winter and our heater decided to work sporadically so I’d have to get up in the middle of the night and take him out into the dark living room to nurse by the dying embers in the fireplace.

I also love the dark, especially when I am sleeping. Night lights and clock radios bother me, and I often bury myself under the covers.

My husband told me about a business in town called Float On, which has sensory deprivation tanks and a special deal for visual artists.  The artist does two floats within a week of each other, and after the second float has 24 hours to begin work on an 8″x8″ piece of art inspired by the float. Float On will be creating a book of the artwork they receive.

I signed up, and had my first float on Friday.

I was definitely nervous! The people at Float On are really great-super friendly, enthusiastic, and knowledgeable.  They do their best to make you feel comfortable. The tank seemed small and I wished I had requested one of the larger rooms, but he really reassured me that there is adequate space once you are in there. He showed me that the door doesn’t latch and it is very light and easy to push open. After the brief intro, I was ready to go. I took a quick rinse in the shower and got in.

There is about 10 inches of water and enough epsom salt to make you float. The water is body temperature, so after a while you don’t feel it any more. It is amazing! There is plenty of room to be able to sit up and still have a lot of clearance above your head, and when you float there is plenty of room on either side. I floated for a few minutes with the door open, got stinging salt water in my eyes like he said all first timers do, and got out to rinse my face. When I got back in I pulled the door closed, and quickly pushed it open again. I did that a few times until I truly trusted that the door opened easily. I let it close one last time and lay back in the water.

It was dark, but not suffocating. I was warm and comfortable, so I just closed my eyes and floated. Thus began the fight with my brain. It would not shut up! I kept thinking of things I needed to do later, or the next day, and I worried I’d forget because I couldn’t write them down. I worried that the school would call and since I’d be unavailable they would have to contact my husband and he’d have to leave work and on and on and on. It drove me batty! I also kept orienting myself in the tank by reaching a bit with my fingers and toes to find the walls. Finally I started to count my heartbeat and tried to let everything go. So I don’t re-invent the wheel, here is some great info on on the physical effects of floating.

I finally started to hit the brain wave switch, and I remember repeating in my head, “I’m floating in space!” It seems cheesy, but was so right in the moment. My brain tried to send scheduling things to me still, but I felt like I could just swat them away and say “later”. I didn’t really know what to expect here, and I decided to just see what would happen and not try to guide it.

I started to see lots of patterns, sort of bubbles and fish scales floating away on waves. I saw lots of animals (they kind of were like images flashing on a screen), like a lion, a polar bear, a squid, a whale, and fish. At one point this crazy seemingly realistic yellow lab sort of popped his head in, and I said “Oh! Hello!”. Then I’d start to think “I need to remember that!” and I’d screw it all up.

I saw a lot of scary faces at the beginning as well. Like the animals they’d sort of pop up and then disappear. There were times when I felt like I was rotating, not in a vertigo sort of way, but a slow gentle spin in space. I’d see stars far away and imagine swimming around them. Sometimes I would put my hands behind my head and it would feel like I was sliding forward and somersaulting. None of it was scary or disorienting, it was actually quite fun. Sometimes I realized that I was laying their grinning. 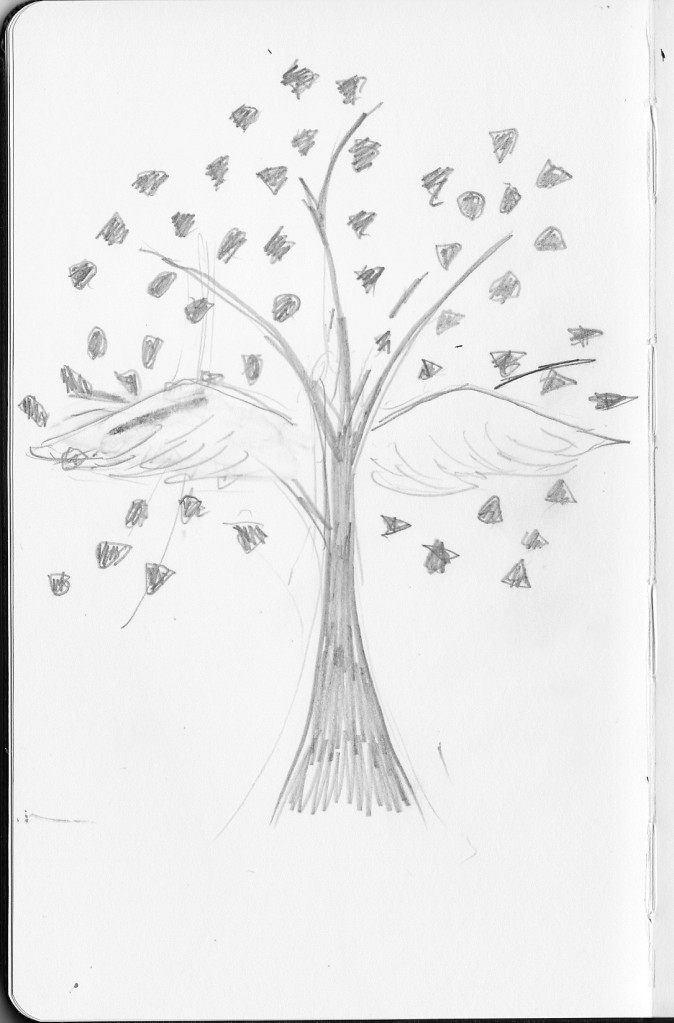 A quick post-float sketch of the winged tree.

I also saw a lot of birds, or at least winged creatures. I saw a beautiful winged tree at one point, it was so vivid I again said “Oh!”. Then I think I fell asleep, because I came out of it as if I had woken up. I stretched and moved my legs a bit. Accidentally touching the sides with my toes or fingers was shocking. Earlier in the float I did that thing where it feels like you’ve jumped when you are about to fall asleep, and it made the water slosh over me and was a shock as well.

After I woke up, I heard some strange sounds (your ears are underwater the whole time). I thought, my god, now I’m hearing things! This is amazing! Then I sat up and realized it was just the music they play to let you know your time is up. I felt so warm and rubbery and relaxed, I was worried I wouldn’t be able to open the door! The shower is a small corner space and felt nice and cocoon like. I didn’t want to get out and go into the larger open spaces. It felt strange to leave the room and walk out into the lobby, like I had just had a deeply intimate and personal experience and going out to a room full of strangers was somehow going to violate it. I sat on the couch and had a cup of tea and took some notes and sketches.

I go back on Tuesday for my second float, and I can’t wait. I’m going to use the time to think about some art ideas I have and see where it takes me.