“All we have to decide is what to do with the time that is given us.” — Gandalf

My love affair with Tolkien is fairly recent. I had only known The Hobbit from the animated movie, which was the movie my elementary school chose to show in the cafeteria on the last day of school before winter break. I only ever saw the first half, because my parents liked to pull me out of school early to get a head start on traffic.

I read The Lord of the Rings after seeing the movies, which weren’t even on my radar when they came out. My husband’s office tends to go out and see big movies on their release day, and he had seen the first two and didn’t like them. He wanted to re-watch them before seeing Return of the King so he’d remember what the heck was going on. We rented the DVDs, and he ended up falling asleep before Frodo could even leave the Shire. I, on the other hand, was completely hooked. I went and saw Return of the King three times in the theater, bought the book, and bought the extended edition DVDs.

The book pulled me in as quickly as the movies did! After the second or third re-read, I was inspired to create this painting – “Cerin Amroth”: 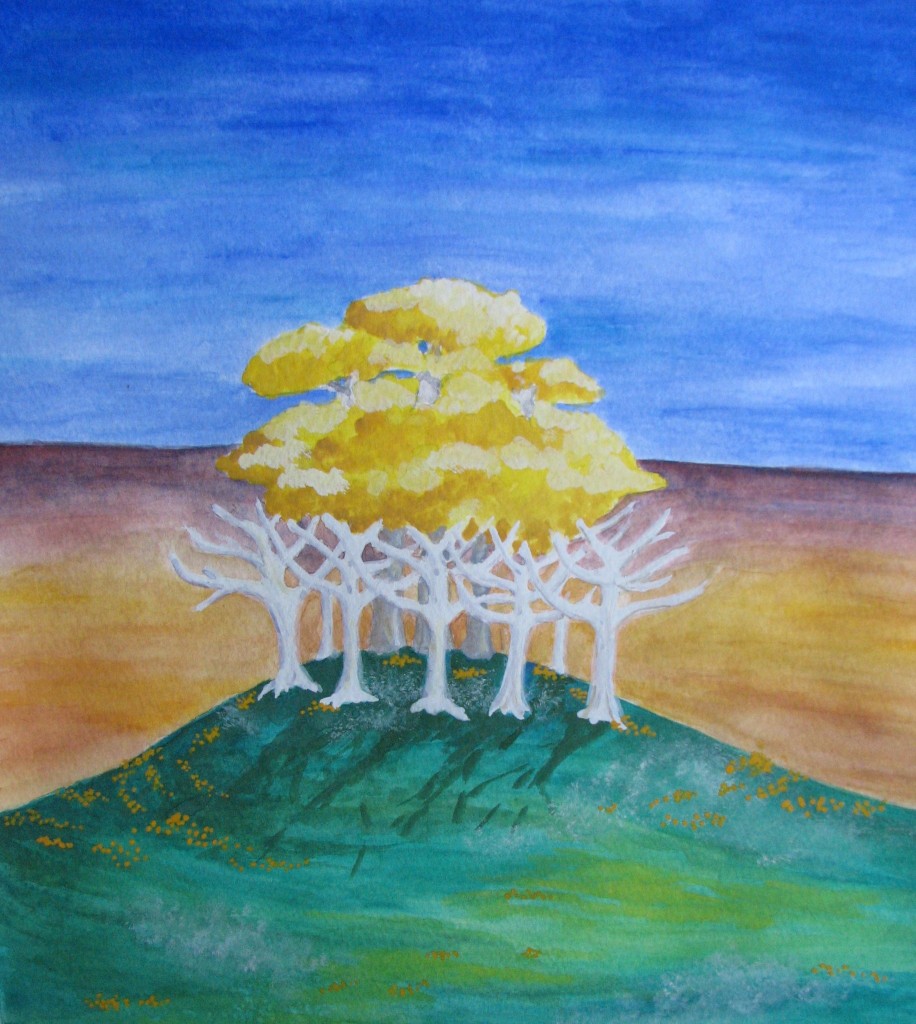 It may look familiar to you, as I’ve created a pendant and an ornament out of it, as well as an iphone case. Shiny! 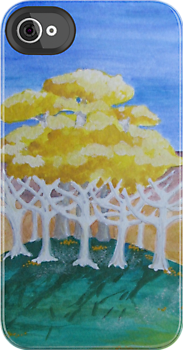 I realized today that I never listed the original painting for sale! The passage that inspired me from the book goes like this:

“When his eyes were in turn uncovered, Frodo looked up and caught his breath. They were standing in an open space. To the left stood a great mound, covered with a sward of grass as green as Spring-time in the Elder Days. Upon it, as a double crown, grew two circles of trees: the outer bark of snowy white, and were leafless but beautiful in their shapely nakedness; the inner were mallorn-trees of great height, still arrayed in pale gold. High amid the branches of a towering tree that stood in the centre of all there gleamed a white flet. At the feet of the trees, and all about the green hillsides the grass was studded with small golden flowers shaped like stars. Among them, nodding on slender stalks, were other flowers, white and palest green: they glimmered as a mist amid the rich hue of the grass. Over all the sky was blue, and the sun of afternoon glowed upon the hill and cast long green shadows beneath the trees.

‘Behold! You are come to Cerin Amroth,’ said Haldir. ‘For this is the heart of the ancient realm as it was long ago, and here is the mound of Amroth, where in happier days his high house was built. Here ever bloom the winter flowers in the unfading grass: the yellow elanor, and the pale niphredil. Here we will stay awhile, and come to the city of the Galadhrim at dusk.'”

*sigh* What a wonderful world Tolkien built. In the spirit of Tolkien’s birthday, and to waste a lot of time and not do anything on my ever growing to do list, I also made a middle earth birthday treasury on Etsy. Happy birthday to the man that has brought me hours of joy!