Creating Loki – Or How I Spent My October

My son wanted to be Loki (from Thor and the Avengers) for Halloween. Unfortunately, they don’t make kid sized Loki costumes. If he was going to be Loki, I was going to have to do it from scratch. This took way longer than I thought it would, and I got much more done artistically on the costume than I did with my paintings this month.

This post is going to be image heavy, so fair warning! If you just want to see the results, scroll to the bottom.

So this is Loki, as played by Tom Hiddleston. 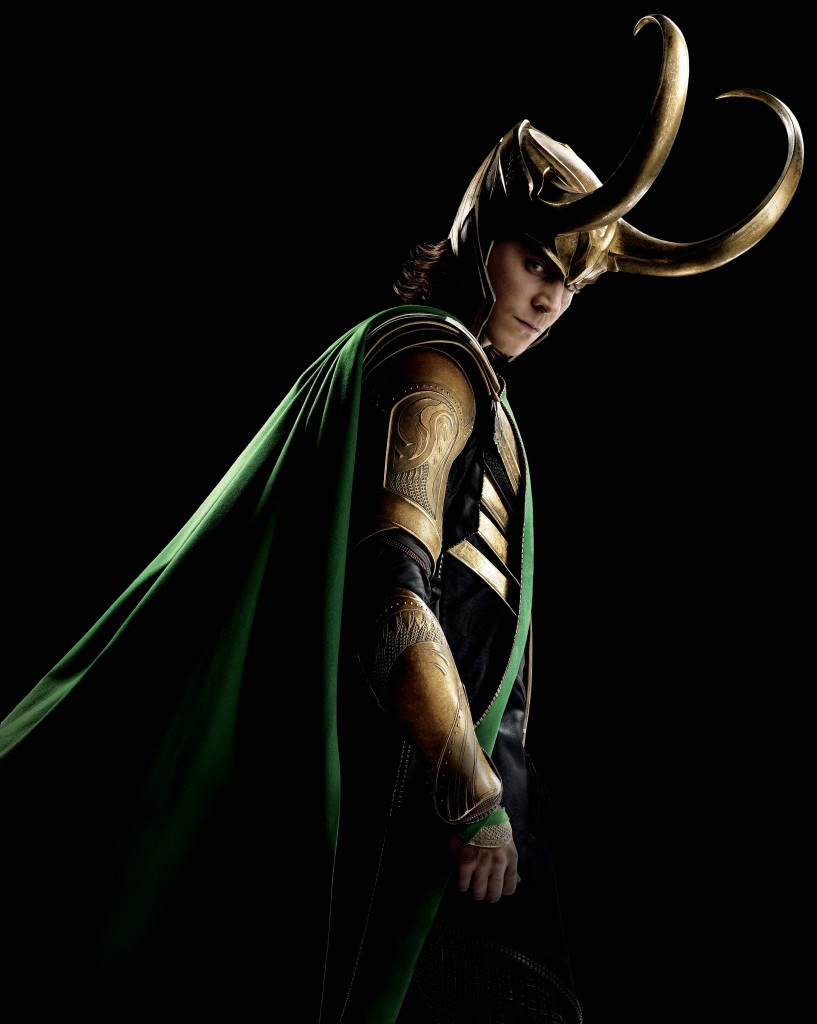 So a Norse god with a lot of armor, billowing cape, and crazy helmet? Sure thing. Oh wait, you say he also carries a spear? That sometimes has a short handle, but is long like a staff when he is in full Loki regalia? And it has a glowing blue orb? Awesome. I’m on it. 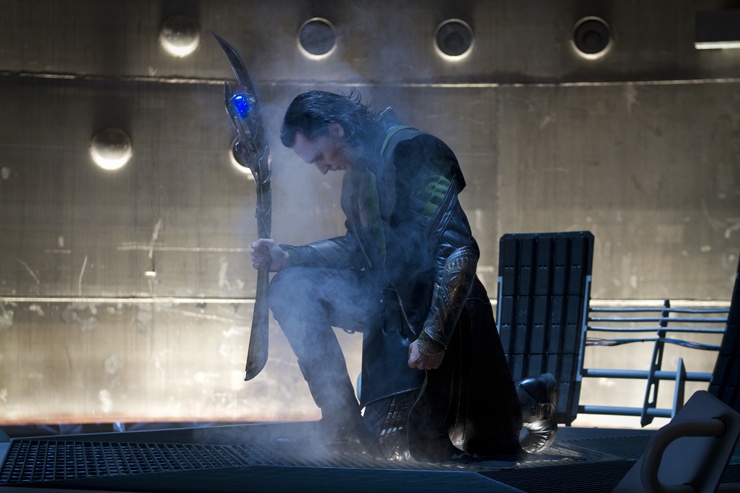 Thankfully there are a lot of cosplayers out there that document their work, so I was able to cobble together different ideas to make the costume come together.

So first, the spear. I carved the general shape of it out of a 2″ block of styrofoam with a saw, then carved out the details with an exacto knife. I used tissue paper to paper mache it, then did another layer with newspaper. 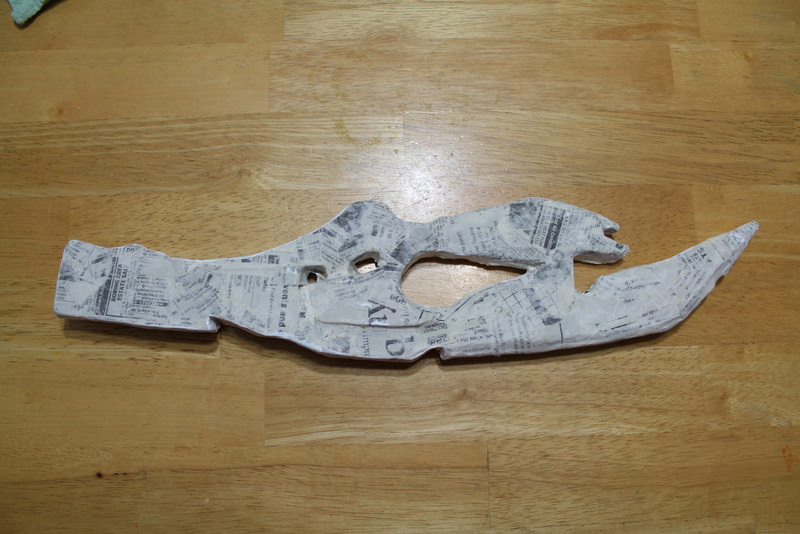 After that I painted on a layer of white acrylic paint. I ended up making one for a friend as well, so here are the two of them drying. A lot of my work time was really just spent waiting for paint and glue to dry. 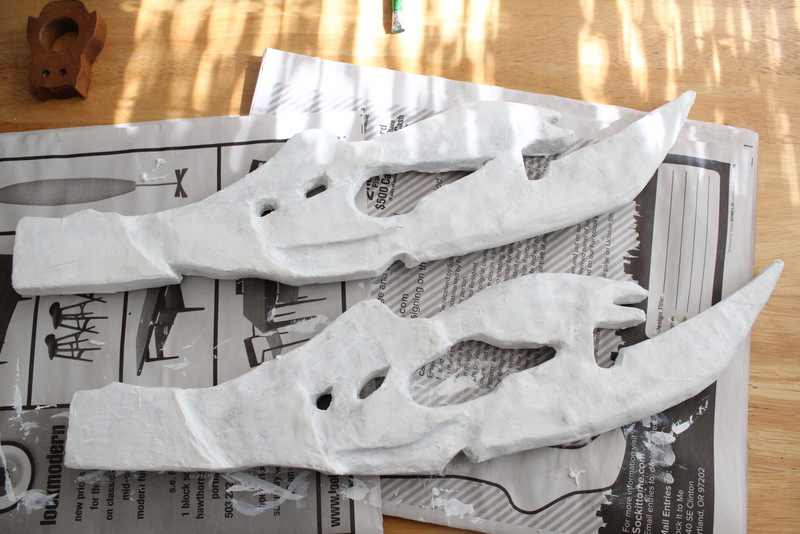 Then I painted it, following what I could see from this screen cap from the movie. 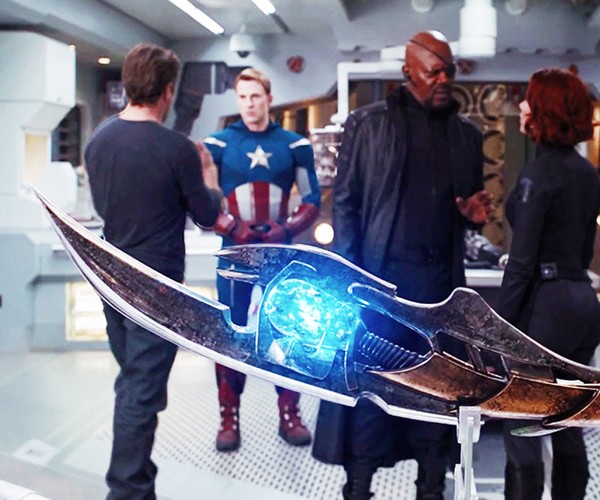 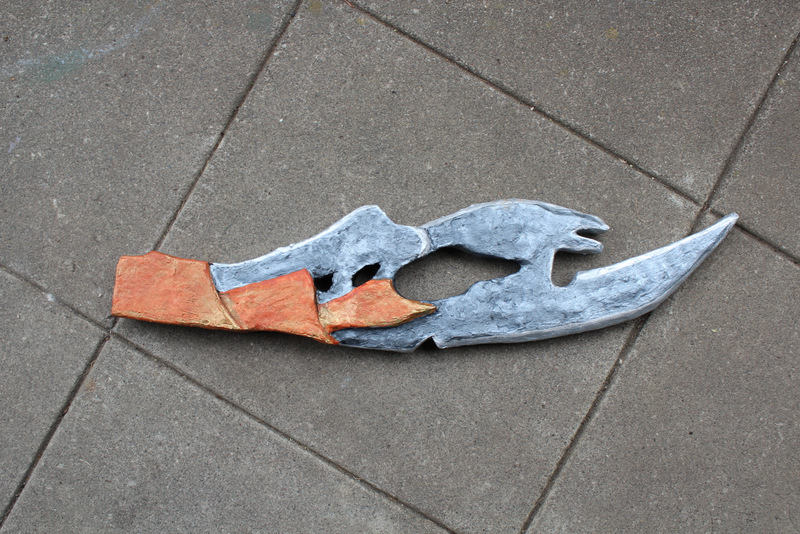 Finally, I carved out a hole and glued it to a long wooden dowel that I spray painted gold. I used the LED throwie idea to tape blue LED lights to a particular kind of watch battery for the glowing part. I sawed off the bottom of a plastic bottle, covered it with scotch tape to diffuse the light, put the LEDs and battery inside and taped over the opening. It stuffs into the spear snugly, and voila! Glow stick of destiny. 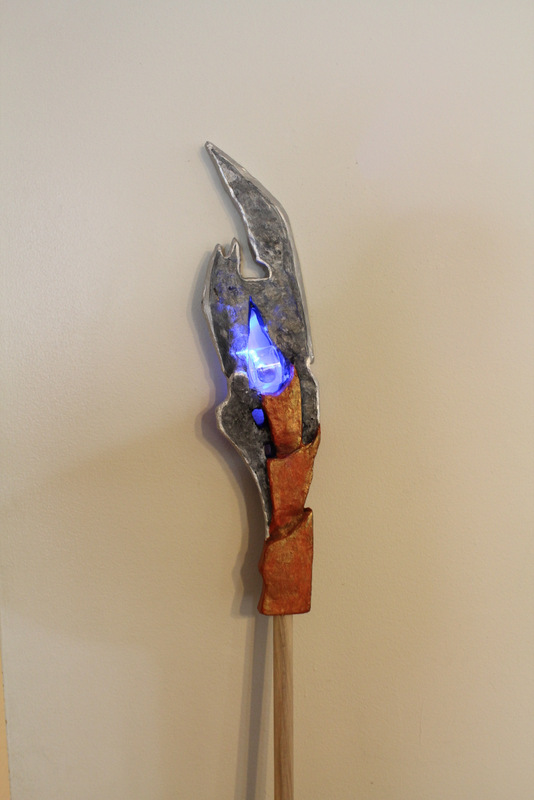 Next up: the helmet. I spent some time wrapping my son’s head up in paper and fashioning a rough pattern (without the horns) for the helmet. Then I used poster board and masking tape to create a firmer base for it before covering it with newspaper. 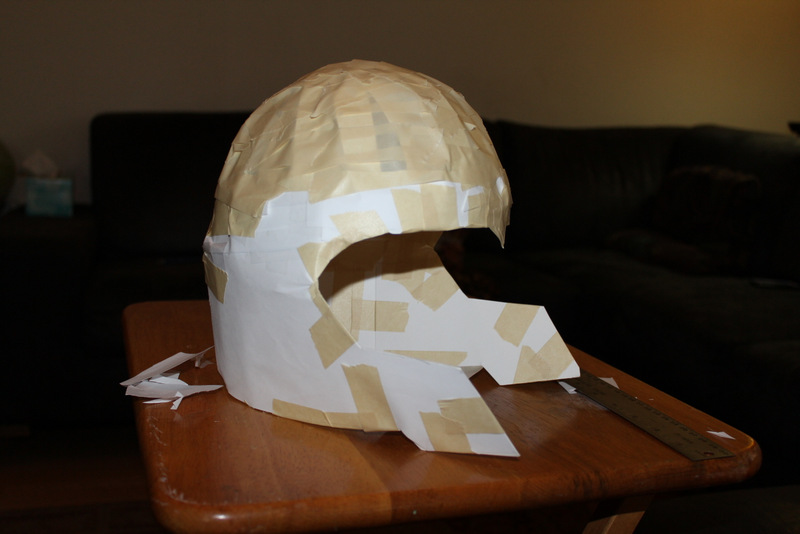 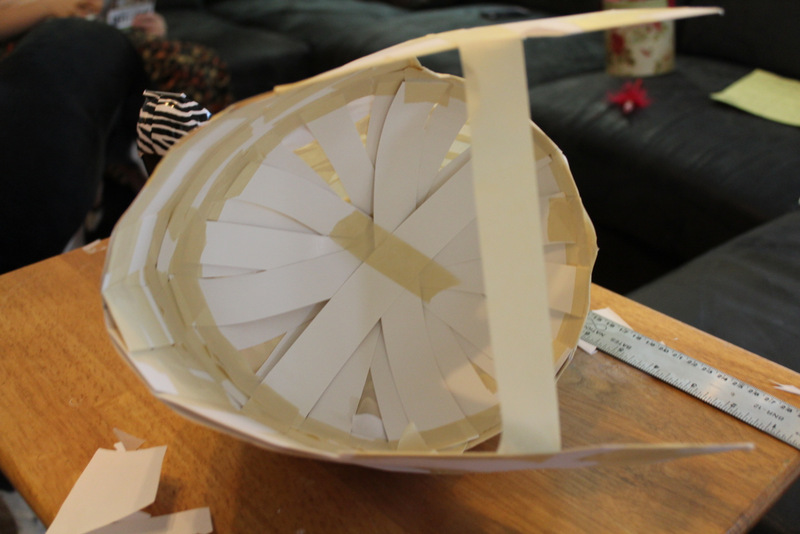 I used a giant roll of paper to figure out the proportions of the horns, and then cut them out of lighter weight poster board. At first I tried to just use two pieces to create a curved horn but that wasn’t working, so I had to cut side pieces and make it essentially a squarish horn. 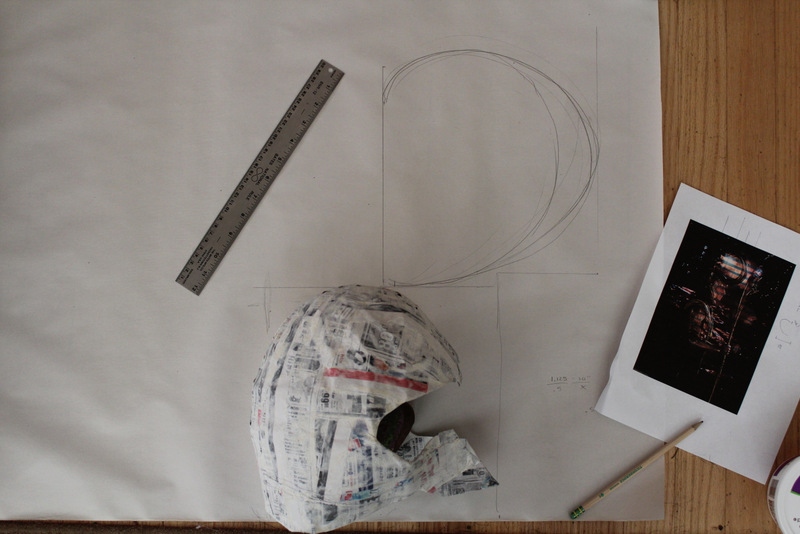 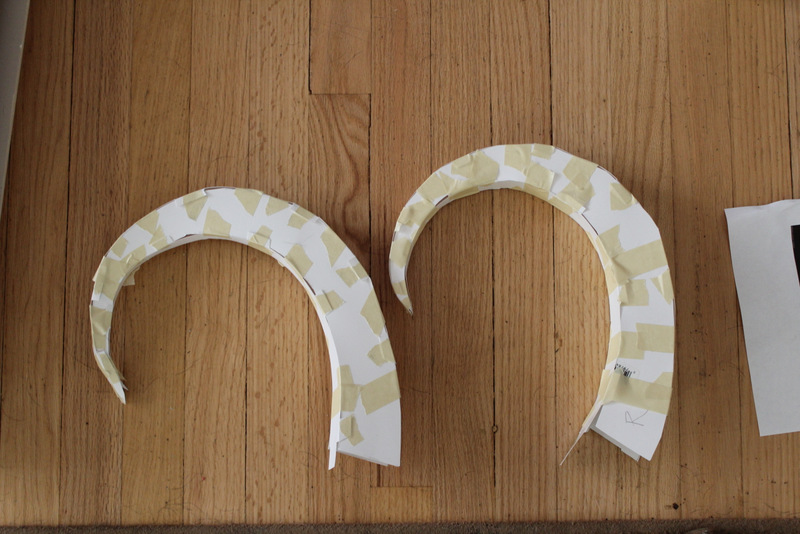 I somehow managed to attach them to the helmet without them looking too wonky! Attaching the paper mache was more difficult here, because the weight of the wet newspaper would warp the horns. I had to do it in increments, a couple inches of horn at a time, with drying time in between sections. 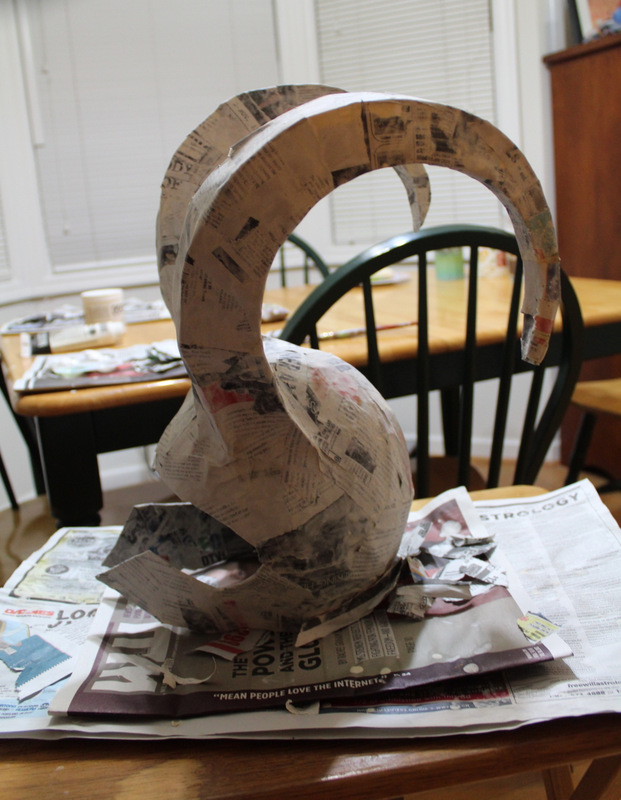 It was really gratifying to have my son come home from school, spot the helmet with the horns attached, and see him nearly faint with delight. After I was done with the paper mache, I painted it with white acrylic. I also used some Golden gel medium light modeling paste to fill in dents and smooth over places. I forgot to mention that I used this paste on the spear as well. After it was dry, it was time for the gold spray paint! 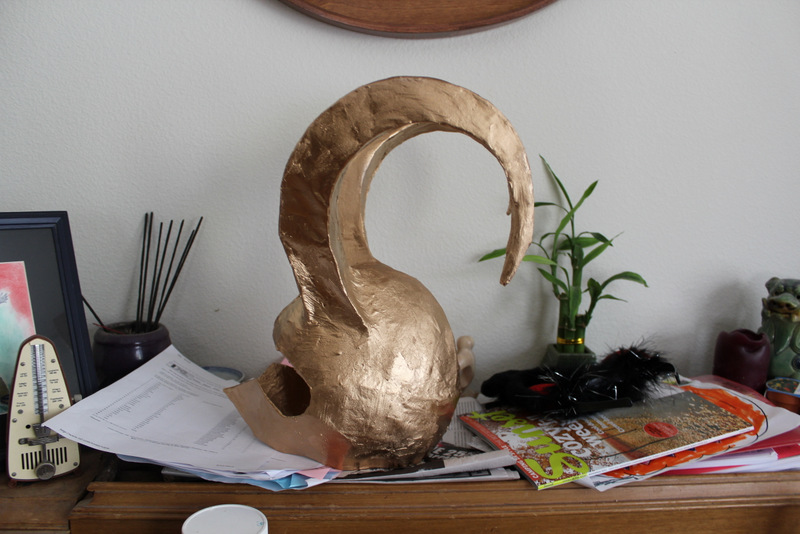 It doesn’t have a lot of the details that the actual helmet has, but at this point I was running out of time and I had to let that kind of thing go. I’m not the world’s best seamstress, or even a good seamstress, so I didn’t have faith I could re-create Loki’s big coat. Instead I bought a long sleeved black shirt and made armor out of foam that would wrap around his arms with velcro.

I learned that if you heat up this craft foam over a stove you can bend it and it will cool into that shape. I bent the foam around his arms after I cut out the shapes, and then used puffy paint to create the artwork on the armor. I then had to seal the foam with something before painting it, so I used some acrylic matte medium I had. Unfortunately the brush marks all stood out when I spray painted them gold, so on the rest of the armor (on the vest) I sprayed it with varnish before painting it. 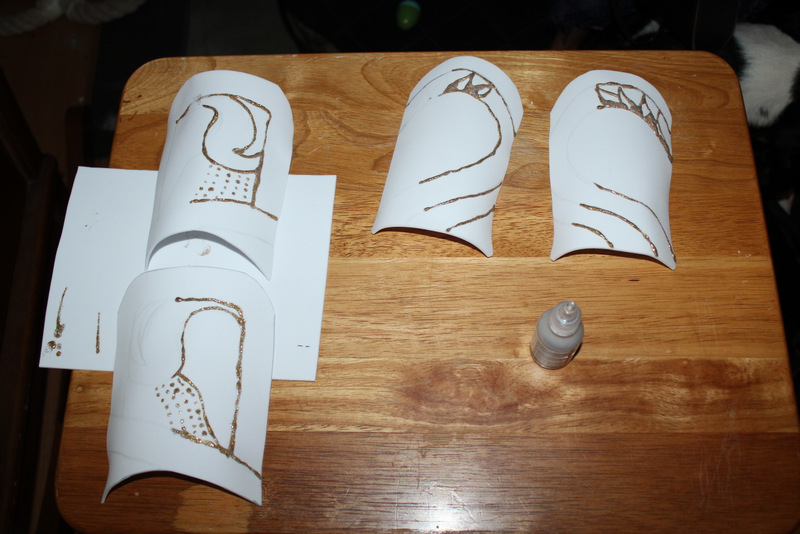 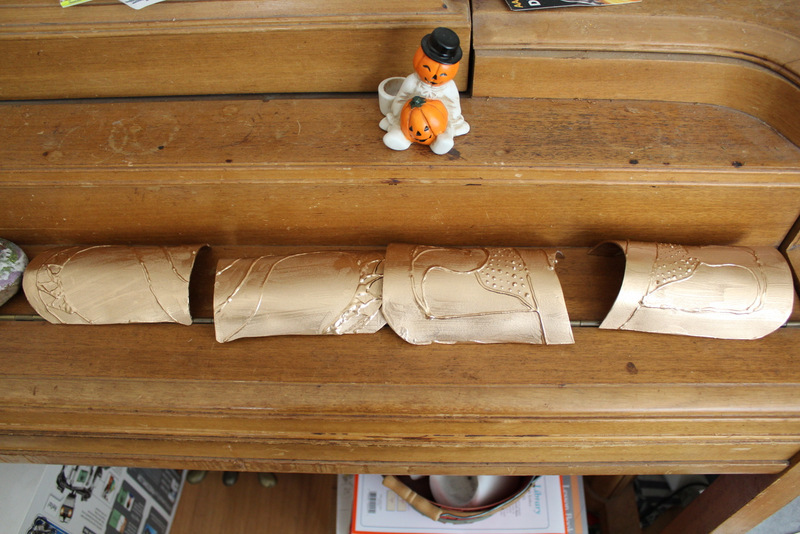 With the shirt and the armor out of the way, I made a vest that he could wear that would have the rest of the armor and the cape. I’m lucky to have friends that are very good at sewing, so I got some step by step instructions on how to try and do this on my own. I made my own pattern and made a black pleather vest. It ended up being a bit too big for him, especially after I got the armor attached. 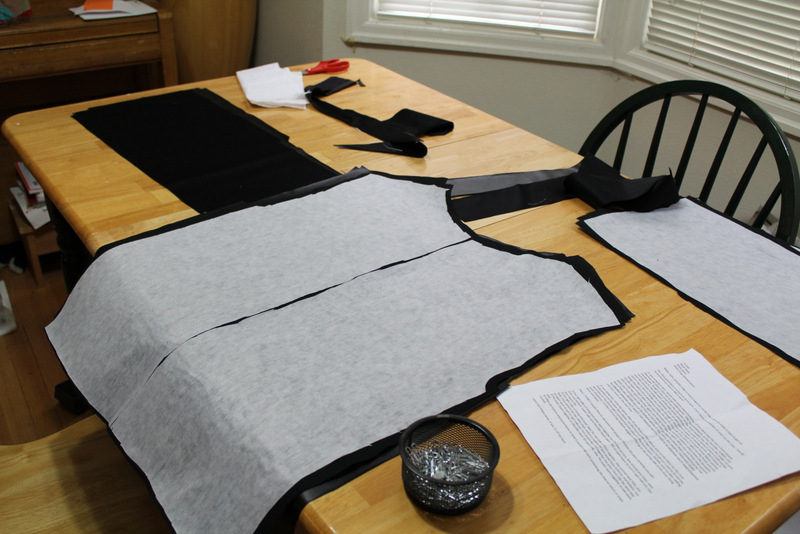 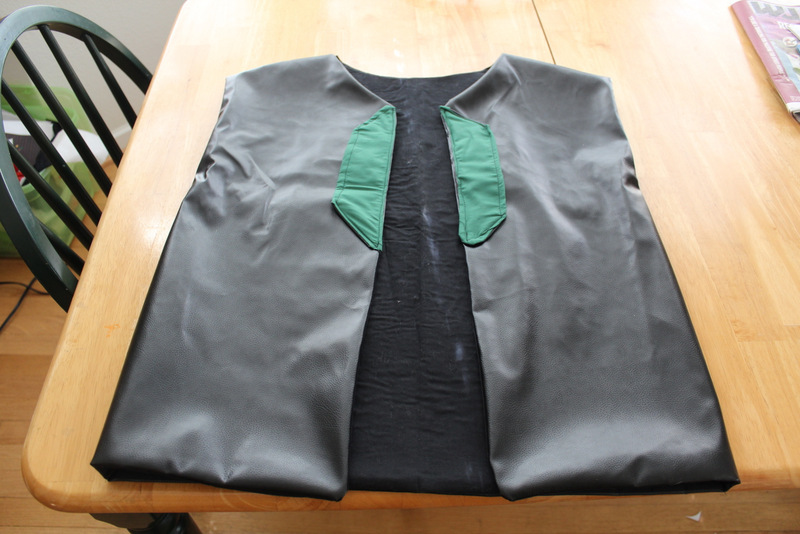 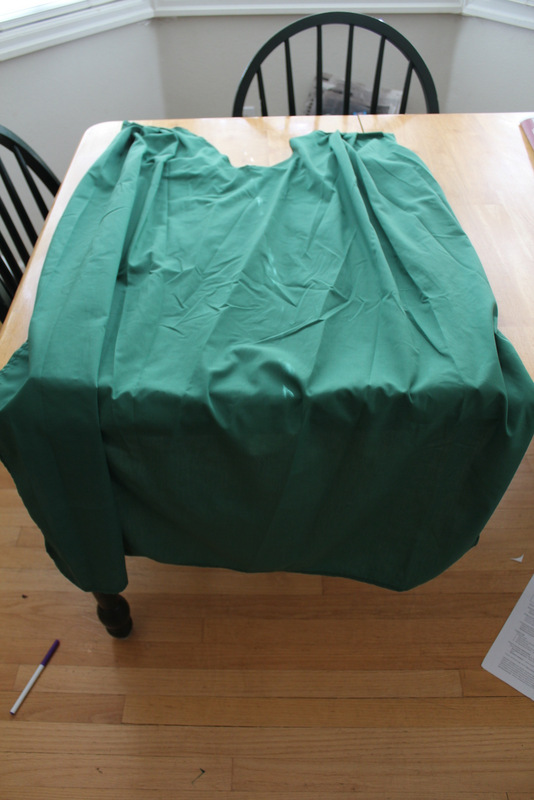 I made the armor for the front and shoulders of the vest out of foam. The worst part was trying to attach it. I did a lot of research and ended up using fabric glue. This seemed to hold well, until I tried to put it on. I ended up using gold thread to tack down the armor pieces and help hold it together. With the cape, I stitched it onto the shoulder armor and then stitched the armor onto the vest. This all happened the day before he wore it to the school’s harvest carnival. Good thing I started a month ago!

He has really curly hair so I got it wet and slicked it back with super industrial strength gel to be a bit more like Loki’s hair. 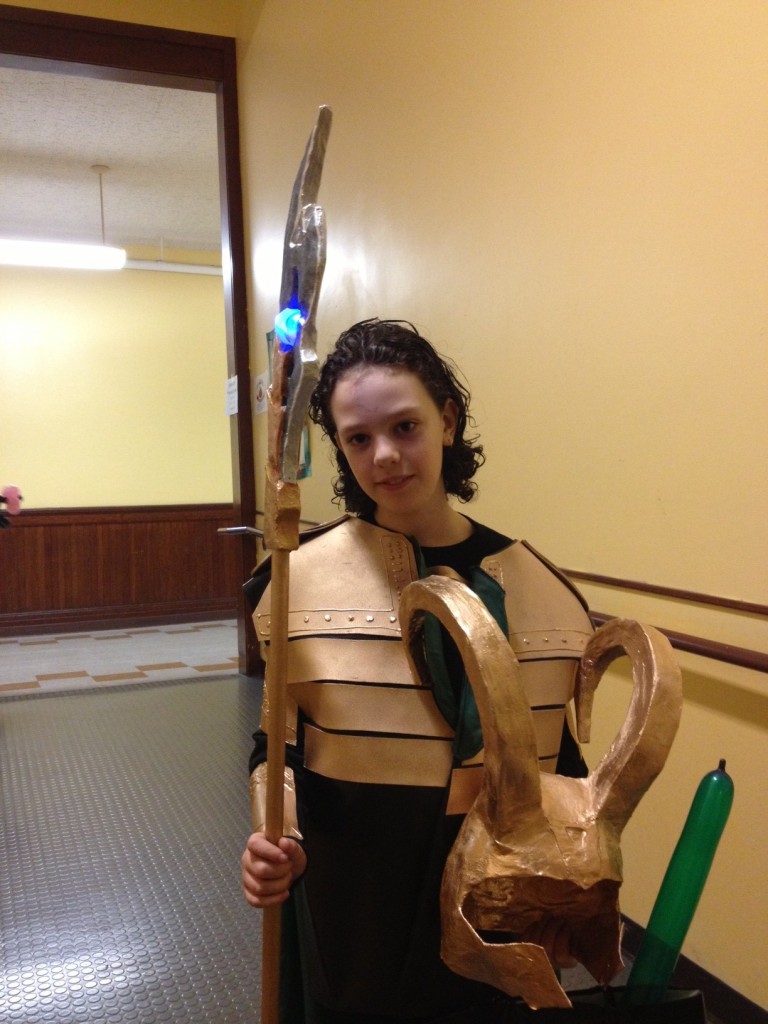 I just love the way the cape billows when he walks. You can see his sister in the front, she is Iron Man. Thankfully you can just buy that costume! 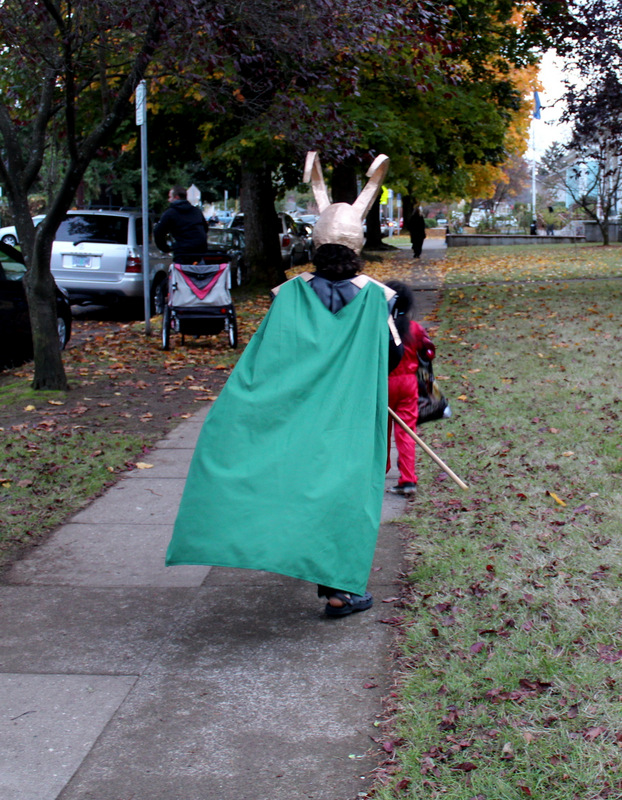 I am Loki, of Asgard. And I am burdened with glorious purpose.

Happy Halloween! Here are some links to the inspiration I found on the web:

How to make a cosplay sword