I’ve been following the blog Dark Roasted Blend for a short time now, and they recently had a very cool and in-depth post about Unusual and Marvelous Maps. I especially like the first map they featured, with Europa, Africa, and Asia all petals off a center circle that represents Jerusalem. I love the symmetry, and the rich colors, and the way the waves in the ocean have an almost quilted look.

I majored in Geography in college and have always nurtured a keen interest in maps. The post on DRB is but a taste of the maps I pored over in the book Cartographia: Mapping Civilizations by Vincent Virga. As I looked at maps created over the last thousand years I found my interest drawn toward two particular things: the varied way maps portray landforms and water, and the variety of decorative features around the borders of the map. It seems today maps have been distilled down into fairly flat and redundant fare: green fertile valleys, brown deserts, blue oceans, thick lines, double lines, thin lines, dashed lines. So many of the ancient maps have a little artistic flair added to them. They not only conveyed spatial information but also a sense of the cartographer or artist that rendered them. Some used an odd angle to look down upon a town with a birds-eye-view, some adding icons to the landscape, while others depicted the landforms or sea with an interesting array of colors, patterns,  or dimensions.

As I browsed through Cartographia I took notes and made little sketches of what I saw – waves and shapes, filigree and embellishments, sirens and monsters. My painting Like Petals on the Earth was my first attempt at creating a landscape and map-like image as art: 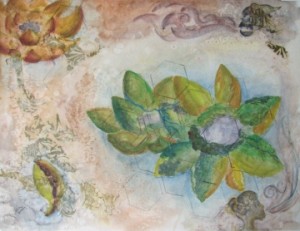 I first ripped up some pieces of fibrous gold-leaf paper and glued them down on the watercolor paper before creating the hexagonal pattern. I then began painting over it all with gouache, aiming for an antique map look around lotus shaped islands. I wanted to include some fantastical imagery around the edges of the map so I let the mottled shapes of the background gouache be my guide and pulled the lady and monster of the winds out of the depths. I’m hoping to draw more inspiration from the maps of old in future work. 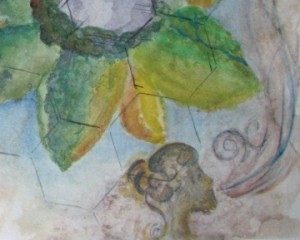