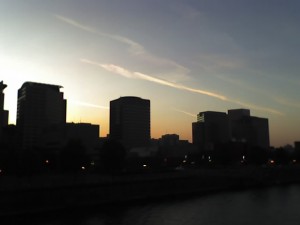 Downtown Portland from the Hawthorne Bridge

This 6-month art installation will coincide with a series of public workshops to help steer the Portland Plan, a guide for the city’s growth over the next 25 years.  Needles appearing across the city will bring attention to the some of the city’s most challenging problems, greatest assets, as well as places with enormous potential.

You can find the points on google maps – click on the locations to learn about their point name, meridian, and why the needle was placed there. I love the idea behind this project as well as many of Adam’s previous installations. I especially like this one called “The Bigger Picture“.

You can become a fan of the project on Facebook, where there are also some really great photos of the needles installed in our lovely city.